Fiddle leaf fig plants have been growing in the wild for millions of years. They’re native to West Africa, in countries like Sierra Leone, where they get 40 to 60 feet tall and bear small green fruit.

They belong to the Moraceae family, which is the plant family of fig and mulberry trees. There are over 1,100 plants in the large Moraceae family, but fiddle leaf figs are a species of the Ficus genus with about 850 other sibling species.

A Killer in the Wild?

Today, the fiddle leaf fig is a docile house plant, but in the wild, they can behave quite differently. Ficus lyrata are types of banyan figs, which means they start life as an epiphyte. Epiphytes grow by landing as a seed at the very top of another tree, where there is abundant sunlight. When the seed germinates, it grows downward towards the ground and may strangle its host plant as it competes for sunlight in the thick rainforest.

Other types of banyan fig trees include the Indian Banyan, which is the national tree of India. The fiddle leaf fig plant was named for its large violin-shaped leaves that resemble a fiddle. The leaves can measure 12 inches wide and up to 30 inches long. They’re thick and leathery with a beautiful dark green texture.

Ikea started carrying small fiddle leaf figs back in 2013 for a low price of $13.99, which really launched them into popularity with the masses. Today, big box stores like Home Depot carry large fiddle leaf fig trees for about $100.

Purchasing a good plant can still be a challenge since it’s tough to transport a large species. The fiddle leaf fig is the number one selling plant of online house plant retailer, Leon and George, which delivers plants in Los Angeles and San Francisco. With no end to the fever in sight, the famous New York City plant store The Sill is constantly selling out of their supply.

On the Big Screen

Fiddle leaf figs can be seen everywhere today on TV and in the movies. Plant purists will point out that they weren’t popular as interior design plants until at least 2005. You can almost certainly detect set design errors when you see a fiddle leaf fig in a movie that is supposed to take place before the year 2000.

In fact, the set designers for the iconic TV show Mad Men were ruthlessly accurate with their plant selection. You’ll often see the popular house plants of the 1960’s including parlor palms, pothos, and large monsteras. But you won’t see one fiddle leaf fig in the entire series, which portrays house plant history exactly as it was.

In 2016, the New York Times called fiddle leaf figs “The ‘It’ Plant of the Design World.” Fiddle leaf fig specimens even made cameos in about a dozen Super Bowl commercials last year. Everywhere you look today on TV and in the movies, you can spot a fiddle leaf fig.

Why Do We Love Fiddle Leaf Figs?

Why did fiddle leaf figs get so popular in the first place? First, they’re the ultimate statement plant, changing the look and feel of any space they inhabit. Millennials love them because they’re not your mother’s ficus, with their bold and memorable silhouette.

There’s also a certain strange alluring quality of the large glossy leaves that makes us think of what the world looked like a million years ago or a science fiction novel. Finally, there’s the fact that many people believe they’re hard to grow and we all love a challenge.

Today, their popularity has soared to new highs. You can’t scroll through your Pinterest feed without seeing one and they are even available at local grocery stores in some areas. But no matter their popularity, they’re likely to be around for a long time. At the end of the day, great design is timeless, and there’s no better interior design plant than the fiddle leaf fig.

Grab the Essentials for Your Fiddle Leaf Fig:

Get it on Amazon with this Code We've designed a professional grade meter for home use!

Use our three-way meter to give you accurate readings on how much water to give them, whether they are in the right place for sunlight and soil pH values. Claire is an expert on growing dozens of varieties of houseplants, especially fiddle leaf fig plants. Our scissors were carefully designed to fit the needs of any plant owner!

Whether you are pruning, shaping, or propagating, you'll do it better with our trimmers. Root supplement is a ready-to-use liquid that is easy to apply to your houseplants.

Simply add Root Supplement to your watering can and apply every two weeks for best results. 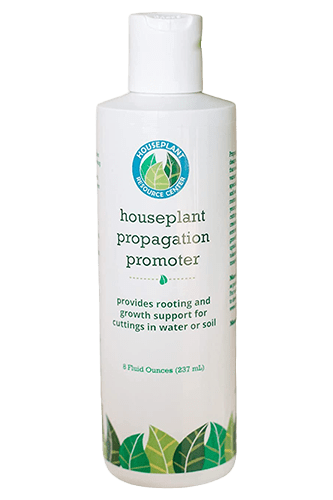 Our Houseplant Propagation Promoter helps increase your chance of success, grow new roots faster, and keep bacteria at bay to protect your cuttings.

The result is a healthy new plant in less time! With a solution that is designed and specially formulated for houseplants, you can help promote their leaves' longevity and maintain their freshness.

Protect your plants from the elements. Give your houseplants the care they deserve!