At a loss of ideas

At a loss of ideas

Purchased the FLF about a month ago from Costco.  It was in a 1 gal pot – and the roots were starting to come out the bottom.  I did my research – I decided on a pot that was only 2 in wider in diameter.  Pot has drainage holes in it – but I added some marble chips that I had to the bottom to make sure that drainage was not an issue.  Replated the FLF and followed the 1 cup of water a week rule. For two weeks she was good.

Then all of a sudden she got brown spots on her leaves.  These spots got bigger till the few leaves that they were on started to drop. It was affecting only the newer growth, not the older growth.  I came back for more research.  I purchased both the fertilizer and root rot treatments as well as a moisture meter. I also purchased quick draining potting soil incase it was the soil.  I replanted the FLF to inspect the roots.  None of the roots were brown or “smooshy”.  There was no odor when repotting.  All roots had sound structural integrity.  I also moved the plant to my upstairs bathroom in a south facing window.  I did not know if it was also a light/humidity issue – so I figured I would correct that as well.

FLF is still showing brown spots along the apex and margins, sometimes the base.  It is not in a similar spot on all leaves.  There is also an initial yellowing of the midrib and veins, then browning.  The moisture meter reads a 2 or 3 at the top/middle of the pot – but at 7 at the bottom.  The roots however do not extend that far down.

Any help would be greatly appreciated.  I can not begin to tally the amount of research, videos, blog articles, etc that I have poured over. 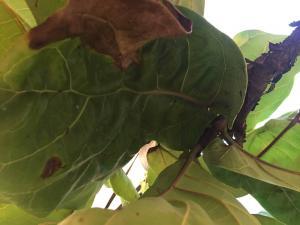 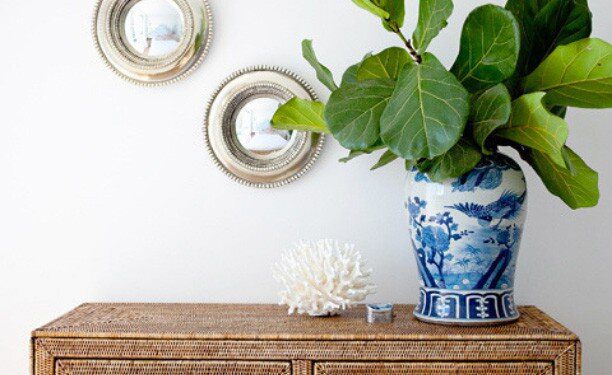